God and Money: why Jamestown IS America…

The conflict between Jesus and Mammon is as All-American as baseball, hot dogs, apple pie and…well, Jamestown…. 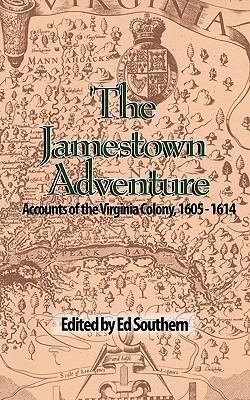 Ed Southern’s compilation The Jamestown Adventure: Accounts of the Virginia Colony 1605-1614 gathers generally brief excerpts from a number of accounts of the Jamestown colony’s proposal, founding, early struggles, and ultimate success as the first successful English colony in the New World.  The list of contemporary 17th century authors that editor Southern includes in this anthology is impressive if familiar to those acquainted with writings on travel and the colonization of British America: John Smith, George Percy, Edward Maria Wingfield, Robert Johnson, William Strachey, Ralph Hamor and John Rolfe. Of these, Wingfield, Smith and Percy offer the most engrossing accounts (political intrigue, adventure, and the horror of the “starving time” of 1609-10) while Strachey and Hamor offer business/administrative/governmental accounts that probably can be deemed more factual if less imaginative. Johnson and Rolfe do something else – the former cold bloodedly, the latter warm heartedly.Johnson, a 17th century PR hack, offers a glowing portrait of life in the new colony in his Nova Britannia composed almost entirely of  promotional ideas from the Virginia Company, half truths from writers like Smith, and rhetorical flourishes designed to sucker Londoners (and others) into signing up to go to Jamestown. Here’s a typical example of that last characteristic, the rhetorical flourish, a very big deal in 17th century prose:

The honor of our nation is now very great by his Majesty’s means, and we, his subjects, cannot enlarge and uphold it by gazing on, and talking what hath been done, but by doing that good, which may be commended hereafter….

This, combining as it does an ethical appeal (for England and St. George) with a call to action (once more into the breech, dear friends), is lovely stuff. And apparently it did its job, because would be colonists signed up in droves….

John Rolfe’s lovely letter to Sir Thomas Dale asking for permission to marry Pocahontas is also included and contains as pretty an example of rhetorical style as any in the English language:

When your leisure shall best serve you to peruse these lines, I trust in God, the beginning will not strike you into a greater admiration, than the end will give you good comfort.

After the soft soap of such an opening, is there any wonder that Sir Thomas Dale, the hard minded military man who brought order  (basically in the form of martial law) to the Virginia colony, would be moved by what followed to grant Rolfe’s request for permission to marry the redoubtable Powhatan’s daughter? Thus the man from whom the first families of Virginia claim descent from she who saved Captain John Smith and who, incidentally, brought us chain smoking (it was Rolfe, after all, who finally made Virginia a viable, profitable colony by developing a successful strain of tobacco) won his bride – a member of the original First Family of Virginia.

But I have digressed. As a writer, professor, and rhetorician myself, I could rhapsodize ad nauseum about some of the prose mastery demonstrated in this modest volume of selections on Jamestown. Better that we should get to the real purpose of all the scribbling that went on through this earliest historical period of our nation’s history: getting an English foothold in the New World by selling people on the “idea” of Jamestown/Virginia/America. It is in this – the selling of this “idea” to potential colonists – where we see the conflict between two thought worlds – the moral imperative to “spread the gospel” and “lead the blind into the right way” as Rolfe states it, and the economic imperative to get rich, to, as Johnson says, take ship for Virginia in order to build one’s stock in the Virginia Company (an inducement to every prospective colonist was at least one share in that company’s stock) so that one could “for the greatness of it…make a dividend.”

God and Money. The two great themes of these contemporary accounts of Jamestown,Virginia, and the New world. Saving souls (those of the Indians, of course, those “blind” mentioned above by Rolfe in referring to his beloved Pocahontas) and making bucks – Johnson suggests 20 or more possible cash crops or raw products (everything from sugar cane to sheep’s wool) that he is certain will make potential colonists wealthy. These were the categorical imperatives that drove Jamestown – and these have become the categorical imperatives that drive the country that grew from this first colony.

Readers of American literature have been, in a way, misled. The “city on a hill” vision of someone like John Winthrop, while attractive in its idealistic depiction of the American Experience®, is not the vision of this country’s potential that stuck, despite the efforts of some of our wiliest politicians. As we know, that’s not America.

What stuck was our sense that we should/could impose religion on others (remember, students, Jamestown was the original example of state religion expansionism) whether they wanted it or not – and that money is the root of all good – which explains why the “laws divine, moral, and martial” imposed heavy penalties for either failing to observe religious practice or failing to work and produce. Gotta praise the lord. Gotta make the doughnuts….

In my piece last year on Of Plymouth Plantation, the aforementioned William Bradford’s history of the New England counterpart to Jamestown, I mentioned the struggles of the Pilgrims with their financial backers – many of whom  were in the same Virginia Company that bankrolled Jamestown, it turns out. That whole “city on a hill” business that Winthrop mentioned was fine and dandy – but the investment bankers in London wanted debts paid – and profits.

The meek might eventually inherit the earth; but the “Jamestown Adventure” set the stage for the American interim to be a nod to Heaven while genuflecting to the ancestors of Goldman Sachs.

4 Responses to God and Money: why Jamestown IS America…