Coffee makes Hemingway surly…and his biographer a little too careful

Ah, thank goodness we can learn about great historical figures from reading thanks to a premise that makes the process “as easy a having a cup of coffee….” 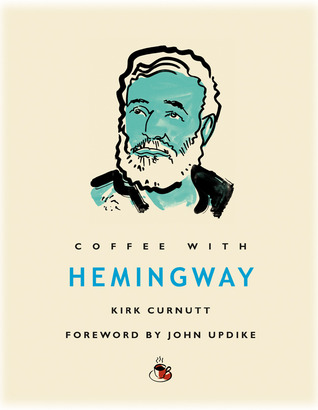 The first essay based on a book from the the 2014 reading list looks at another in a series of “biographies” that use the device of having the author have coffee with an illustrious personage while readers “eavesdrop.” I reviewed one of the works in this series last year and, life being what it is, I stumbled upon another at my favorite used bookstore sometime in the fall and snagged it for this year’s list. As I noted about this book’s predecessor, which focused on Mozart, these works are meant to be quick reads – and they represent the “high concept” approach to publishing. This explains, as I noted in my Coffee with Mozart review, why the two best selling titles in the series are Coffee with Marilyn and Coffee with Groucho. And why Coffee with Plato lags in sales….

That’s perhaps neither here nor there, however. Though a slight book, Coffee with Mozart would teach anyone a few things about the great composer that even watching Amadeus wouldn’t provide while providing a charming, if possibly completely imagined, characterization of the person. Coffee with Hemingway teaches a few things about the American literary lion – and, well, some unintended lessons about writing fluff biographies.

Coffee with Hemingway is in some ways a “more serious” book than Coffee with Mozart. Neither is going to win any awards as great works of biography, but the Hemingway book works somewhat better than the Mozart book as biography. Perhaps this is because we know Hemingway’s persona much better (he was certainly a major 20th century celebrity, even though, unlike most of our current celebrities, he actually had talent and could do something besides be famous for being famous) and, as a writer, he left behind voluminous journals, correspondence, and other materials upon which Kirk Curnutt, professor of English at Troy University in Montgomery, Alabama, could draw in developing his imaginary coffee klatsch. So much of the conversation in Coffee with Hemingway is composed of actual Hemingway statements used either in paraphrase or quoted directly. So Curnutt would likely win the scholarly accuracy competition going away against Julian Rushton, the author of Coffee with Mozart.

What keeps bugging me, though, is that I liked the Mozart book better. As an English professor myself I understand the desire for accuracy: indeed, we have a whole school of criticism devoted to making sure texts are as accurate (i.e., as close to the author’s intent) as possible. Curnutt is careful with Hemingway. As a writer himself, he understands the misunderstanding that haunts all writers – in formalist criticism (well, “new” criticism, as it was called) readers can be ever so guilty of the “intentional fallacy.” So he never assumes to have Hemingway say anything that he hasn’t vetted to make sure that’s what Hemingway would say.

Which is all well and good, I suppose. But in sticking so close to the “real” Papa’s actual words, he misses an opportunity to allow himself to imagine what Hemingway would say. And that’s a shame. What makes Rushton’s conversation with Mozart endearing in its own “pop history” sort of way is that Rushton does allow himself to imagine what the Boy Wonder of Music would say. And lets him say it – zany at times though it might be.

I feel for both these guys. In my most recent book, the main character has a conversation with Ringo Starr – as famous a figure as the 20th century produced. And I just let Ringo say what I figured Ringo would say based on what I’ve seen Ringo say in interviews. And I think I got it right, if reader/reviewer reaction is any proof. Sometimes the spirit of what’s said offers more insight than scholarly accuracy in recording what would be said. Rushton seems to get that – and his Mozart comes across as more vibrant and believable than Curnutt’s Hemingway even though Curnutt uses plenty of Papa’s actual words to prove that Hemingway was a surly so and so. Curnutt’s is the more accurate conversation, perhaps; but Rushton’s is much more fun. And a “Coffee with…” book should be fun because no sensible reader is going to mistake it for serious biography. Maybe what I’m saying is that, as Rushton shows us in his conversation with Mozart, it’s the music, not the lyrics, that make the song….

So here’s the takeaway – if you’re writing a scholarly biography of a major literary/historical/artistic/cultural figure, yeah, get the quotes and their intent right. That sort of stuff is what scholarship is all about. But if you’re writing a “Coffee with” book about one of the above sorts of figures, why not have fun with it? I mean, some long dead luminary is not going to sue for slander, right? Right?