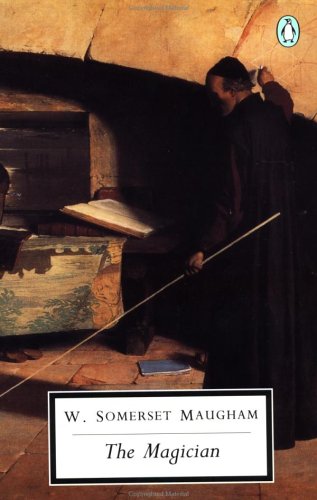 Somerset Maugham again – this time, his “early” (1908) novel, The Magician. Maugham’s attempt at “paranormal romance,” as the young folks call it (and the heading under which book stores would/should stock it) is part good old fashioned British object lesson on the dangers of young women being indulged – and protected – too much, part horror story, part soap opera, and part ripping yarn. This selection from the extended 2013 reading list has a little something for everyone.

The novel tells the story of young Margaret Dauncey (a word that can mean egotistical or odd), the beloved (and former ward – see what I mean about a lesson? Always listen to Daddy-figure/Hubby) of Harley Street surgeon Arthur Burdon (a surname Maugham chose as carefully as Jane Austen chose Knightley for the surname of the hero in Emma). These two seem blissfully happy, although the joy of their nuptials has been postponed so that Margaret can go study art in Paris (there’s that indulgence I was on about earlier). It is there Arthur visits an old mentor/colleague, Dr. Porhoët, who has become a student (scholarly, only) of the dark arts: necromany, alchemy, yadda yadda. And speaking of yaddas, this is where the villain of the piece enters: one Oliver Haddo, another student – and would be practitioner  – of the dark arts whom Porhoët knows. You can probably guess what’s going to happen…well, kinda, sorta….

(Haddo is a caricature of Aleister Crowley, whom Maugham met while he was in Paris doing – something or other, but mainly hanging out and meeting cool people like Cezanne. Crowley and Maugham evidently didn’t get along, Crowley being all about his image – dark and dangerous – and Maugham considering him a buffoon. A friend of mine likes to say, “You turn your back on a poet at your own risk.” Well, the same can be said of novelists, especially witty, urbane, and just a tad mean spirited ones like Maugham. Haddo, for all Maugham’s effort to make him sinister and repulsive, comes off as – you guessed it – something of a buffoon.)

Anyway, Haddo, through some sort of spell, gets control of Margaret and elopes with her. They marry and the last part of the novel is Arthur Burdon, aided by a slightly reluctant Porhoët and Susie Boyd, Margaret’s friend and companion (who is described as plain – compared to Margaret – but with a good figure and always well dressed) who is secretly (well, not that secretly since all the major characters in the novel know well before she is willing to  admit it publicly) in love with Arthur.

Haddo’s fiendish plans for Margaret involve allowing her to retain her virginity for his nefarious needs and the creation of homunculi.  The ending is true blockbuster stuff: Arthur, the ever pragmatic scientist/physician gets “a feeling” that something horrible is being done to his beloved Margaret. Susie (the long suffering – think of as Elinor Dashwood to Margaret’s Marianne or Agnes Wickfield to Margaret’s Dora Spenlow) and Dr. Porhoët accompany him to Haddo’s family’s ancestral home at Speke where the final confrontations occur. People die, houses burn down, and Arthur finally realizes how wonderful Susie is.

Maugham was a wonderful writer and wrote a couple of arguable masterpieces in Of Human Bondage and The Razor’s Edge as well as some other very fine work such as The Moon and Sixpence and the previously reviewed Cakes and Ale. The Magician doesn’t come up to the standard of these works. But it’s a fun read and pokes fun not just at Aleister Crowley but at Bram Stoker, too (the last part of the novel is much like the last part of Dracula – only one realizes Maugham’s tongue is wedged firmly in his cheek).

One last note: Aleister Crowley did get a measure of revenge on Maugham for the buffoonish portrayal of him in The Magician. He wrote a critique of the book, panning it roundly and even accusing Maugham of plagiarism (somewhat laughably).

He signed the critique – “Oliver Haddo.”